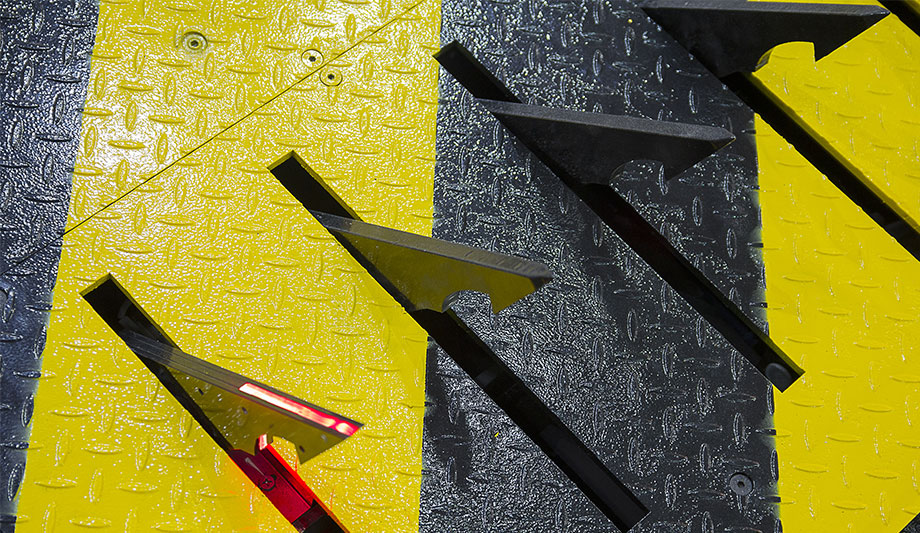 In 1998, at the U.S. Embassy in Dar Es Salaam, Tanzania, a crash-rated, moveable barricade prevented the attacker’s vehicle from entering the rear compound of the building and, thus, reduced the loss of lives and damage to the facility. Unfortunately, they were not used at the embassy in Nairobi, Kenya when it was bombed the same day. However, by September of that year, 14 barriers, including moving wedge barricades and crash rated bollards, were shipped to these two embassies.

At the dedication of the United States State Department headquarters as the Harry S Truman Building, bollards provided a first line of defence, including securing the diplomatic and Congressional drive entrances. The custom stainless steel bollards feature lights to improve visibility at night.

Delta's bollard system is designed to destroy the front suspension system, steering linkage, engine crank case and portions of the drive train of any 6,803 kg non-armoured or non-tracked vehicle hitting them at 100 kph. They will stop a 66.7 kN vehicle at 80 kph.

The bollards are raised and lowered into the guard position by a remotely controlled precision hydraulic power unit or a precision pneumatic power system. Under emergency conditions, the bollards can be raised in as little as a single second. With the exception of minor non-structural damage, such as scratches, they are fully operational after taking a 104 kph hit from a five ton vehicle.

Just one month later and within hours after the terrorist bombing of the USS Cole in the Yemeni port of Aden on October 12, 2000, barriers were airlifted to Yemen for deployment there and nearby prospective targets.

At the most recent attack (September, 2008) of the U.S. Embassy in Yemen, the barricades were up and protecting the entrance, keeping the bombers outside the compound. Those barriers are tested at K54 and stop a 29,483 kg truck traveling at 112 kpf. That’s 5.4 million foot-pounds of energy!

At the entrance to the embassy, the barrier creates a sally-port with a crash-resistant gate to tightly control traffic into the embassy. It is lowered to let in a car, while the gate in front of the car stays closed. The barrier in back then raises and the car is sandwiched between it and the gate. Once searched and OK'd, the gate opens and the car is allowed to enter the embassy.

The U.S. Embassy in Amman, Jordan, situated in the middle of one of the most volatile areas of the world, also relies on a crash-rated barrier to protect its facilities from terrorists. This embassy not only uses the barrier to protect its compound from charging vehicles but the barriers also create a sally-port, similar to that at the Yemeni embassy, which tightly controls traffic into the embassy.

Peshawar Provides Why Embassies Use Barriers

In 2010, barricades at the United State Consulate in Peshawar, Pakistan, helped retain the attackers by preventing the bomber’s vehicle from crashing past the pedestrian gates and forcing the attacker to detonate the truck bomb far from the building. This saved many lives and the building. If one compares the total destruction of the Marriott Hotel that took 60 lives in Islamabad in September of 2008 to the 2010 event in Peshawar, it is easy to discern that a large factor in saving lives from vehicle bombers is to successfully stop the attacking vehicle far enough away from the building to avoid the high pressure shock wave of a bomb blast. In a CNN photo published April 5, 2010, the buttress of the barricade is seen with the charred truck frame, wheels and engine parts.

Visit any U.S. embassy throughout the world and you will find them protected from vehicle assault and some from bio-attack. This includes major big embassies, such as Beijing, to smaller ones in Estonia, Indonesia, Papua New Guinea, Ivory Coast, Guatemala, Nepal, Lithuania and Madagascar. This also includes consulates in Florence, Italy, Sarajevo, Vienna and cities in Germany, Greece, Macedonia and Saudi Arabia. Over 160 U.S. embassies and consulates in 130-plus countries as well as those of the United Kingdom and other nations incorporate such premier perimeter protection.