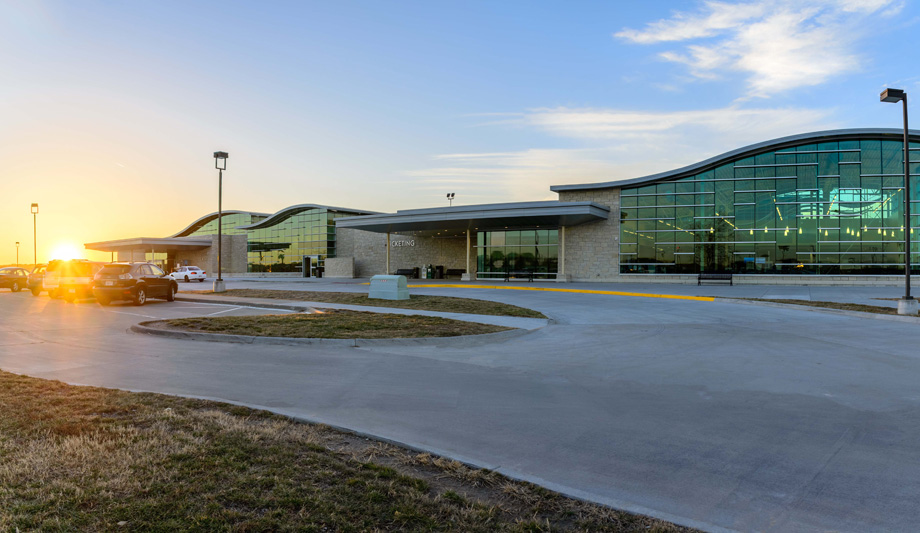 Manhattan Regional Airport (MHK), located in the picturesque and growing Flint Hills region of Kansas, cut the ribbon on its new terminal earlier in 2017. More than triple the size of the old facility, the new 42,000-square-foot building emerged from the footprint of the existing terminal in an unusual manner. The airport essentially cut its existing terminal in half, and then demolished, rebuilt and, expanded each half during separate phases—while maintaining operations the entire time.

The growth in aircraft arrivals, departures and overall passenger traffic demanded that the airport plan for significantly expanding the terminal building. In 2009, MHK had approximately 25,000 total enplanements, and in 2015, the airport exceeded 66,000. “Our original design from the architects Mead & Hunt called for mantrap portal entrances from the secure hold room, or deplaning area, into the unsecured “meet and greet” public area for baggage claim. The only problem was that the door design we wanted was no longer available,” explained Jesse R. Romo, MHK Airport Director.

While initially a disappointment, the inability to install the specified entrances did create an opportunity for Romo and his team, and in the summer of 2015 they began looking for alternatives to the mantrap portals. “We talked to other airports, including an airport in central Wisconsin to get good intelligence on what entrances were working well and which could fit our needs,” said Romo.

“Throughput was a chief concern and when looking at alternative mantrap portals, throughput was rather low,” continued Romo. “If we’re looking at 100 or more people trying to get out of the de-planning area, large revolvers gave us much better throughput, and this became the deciding factor. Both types of entrance had their pros and cons, but when we broke it down in terms of customer service and satisfaction, we decided on the Boon Edam revolving doors.”

“For the new terminal, every decision we made we looked to the future, not just the now. Our market continues to grow, so we had to choose technology that can handle that future growth and change.” MHK airport chose two Boon Edam revolving doors to handle peak throughput demand but also to provide redundancy in the event one door needs maintenance.

The Tourlock 120S one-way security revolving door is activated by a presence detection sensor on the canopy of the door facing into the hold room. When people approach the door, it begins rotating automatically, allowing passengers to get to the other side quickly —no waiting or stopping. Each door prevents people from coming back into the hold room by virtue of a weight mat and overhead sensors located in the side of the door that people would normally attempt to enter from the non-secure, “meet and greet” room due to the direction of rotation. Should a person attempt to enter the secure hold room area, the weight mat and the overhead sensor detect their presence and stop the door.

A major impetus for a brand-new terminal was the increase in the size of the jets landing at MHK. Anything larger than a 60-seat capacity and the Transportation Security Agency (TSA) requires a “complete” security program in terms of access control, video surveillance, and other systems. Manhattan Regional Airport serves a market of over 200,000 people and includes Kansas State University, Ft. Riley, and the recently-awarded National Bio and Agro-Defense Facility (NBAF).

The airport has daily flights to Dallas and Chicago and a number of charter flights as well. Two gates and two jet bridges can service two planes at the same time. “Once the doors were installed, they looked really nice, even futuristic, and they are very consistent with our regional look, befitting the rolling flint hills of the area. Not only do the revolving doors fit our plan for the future, they blend in nicely with our attractive design,” concluded Romo. 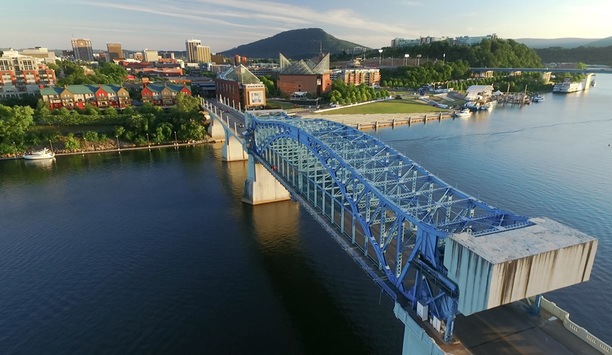 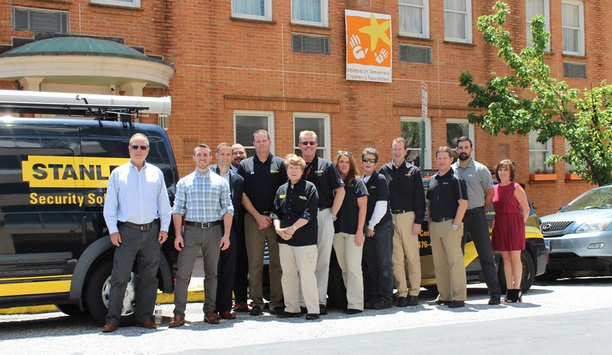 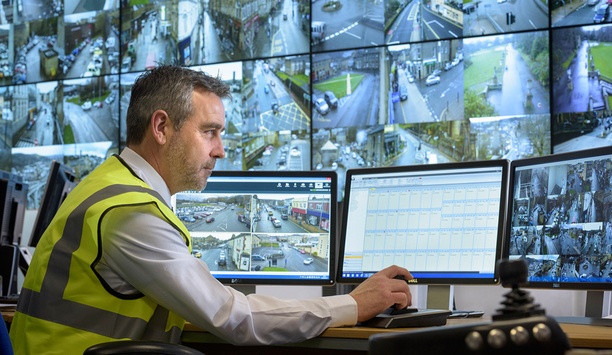