Müller is one of Europe’s leading health and beauty retail companies. Nearly 24,000 employees work in over 600 locations all over the continent. And Müller continues to grow: an average of 50 new stores are opened each year with a product range which includes CDs, toys and stationery and really sets itself apart from the competition – at prices which Müller invites you to check against competitors’ prices, in accordance with their slogan: “You should compare our prices.” Müller ensures that prices will remain just as low in the future by using eneo video surveillance which has been installed in over sixty Müller stores so far. Inventory discrepancies are a growing problem in retail and can lead to rising prices if they are not prevented effectively. Thus protecting honest customers is essential. At Müller, the installation of the systems is always in accordance with strict data protection regulations which are fulfilled meticulously by the responsible installation company. Why did Müller choose eneo? “Based on the recommendation of our installation company, we carried out a three-week test in one location, and it was very successful,” explains Mario Messner, Managing Director at the security agency Müller Sicherheitsdienst Ulm MSDU. “Due to the high image quality, a lower recording rate was sufficient compared to another recorder model which we had in operation at the same time with 25 pictures per second. Because we wanted to keep the memory requirements as low as possible, it didn’t take us long to make a decision. We were also impressed by the price-performance ratio, which is significant when numerous cameras are being installed in each store.” Mario Messner has never regretted this decision, quite the contrary. “We now have numerous cameras, domes and recorders from eneo in operation in over sixty stores. The number is in the hundreds. The failure rate is so minimal that it is negligible. The equipment is absolutely reliable.”

Security With 360° Video Surveillance: Use Of The Eneo Almira Camera In The Jewish Museum, Frankfurt, Germany

The Jewish Museum in Frankfurt is one of the three major Jewish museums in Germany.  It traces the interrelationship between Jews in Germany and their environment based on the example of Frankfurt.  Prior to World War II the city of Frankfurt had the highest percentage of Jewish inhabitants with over 26,000 Jewish citizens.  The building is secured today by 360° video surveillance.  Its open character was intentionally selected, as the changing exhibitions are to be accessible to all interested visitors.  However the museum, which is housed in two classical mansions, is one of the sites generally at risk as is the Holocaust Memorial in Berlin.  A balancing act that requires exceptional understanding from decision makers when it comes to security precautions. Blind angles caused by concrete columns in the foyerThe solid reinforced concrete construction of the building complex renovated in the 1980s in particular cannot always be regarded as being advantageous.  Several concrete columns in the entrance area obstruct viewing and proved to be restrictive for installation of a video surveillance system suitable for identification of persons. Thomas Sittig, Technical Director of the Museum and responsible for security said, "In addition to appropriate checks of baggage and persons we have been using video surveillance since the opening.  However, we encountered some difficulties in extending the existing system in the sensitive entrance area - on the one hand some areas of the foyer are difficult to view, and on the other hand the cable routing was made difficult because of the reinforced concrete and it is not possible to put it under plaster."Perfect solution replaces several cameras In the planning phase Peter Kleist, the Project Manager of Heer GmbH from Frankfurt, therefore proposed a solution with 360° video surveillance.  He said, "The floor plan would have made at least five or six conventional surveillance cameras necessary to cover all the angles.  But when we then considered the Almira System with its four virtual cameras, it immediately awakened great interest!″  The special lens of this ultra wide-angle camera not only delivers a 360° image field; with the ‘Almira C-1202', up to four virtual cameras can be displayed and controlled with full Pan/Tilt/Zoom functionality.  The system is installed at a three-metre height so it can be seen and it has the whole foyer in view.  Plus, its high-resolution 3-megapixel CMOS sensor delivers brilliant quality pictures to the full satisfaction of viewers when they view the 42" plasma monitor in the control centre. Three megapixels for clear and sharp picturesThe Security Officer can now choose between 2 x 180° panorama, 4 x 90° panorama or 360° views, and use a Videor KBD1 Keyboard to control the camera and all the fully electronic PTZ functions.  At the same time, persons who enter a predefined area can be tracked automatically by the ‘Motion Tracking' function. "Features such as the integral motion detector, 4x zoom and intelligent alarm management are very helpful for us.  In particular the retrospective motion tracking, or the ‘Luggage Left' function that allows objects to be monitored in predefined areas.  The system immediately triggers an alarm when an exhibit is removed or, for example, an unattended bag is added," explained Sittig. High-resolution 360° recording"The 360° camera images are recorded by the ‘Almira R-01' Network Recorder which is matched especially to the Almira Camera," explained Peter Kleist.  "The recorder is connected over a high-speed data link and we installed it behind one of the columns.  It provides the advantage of also allowing execution of the full functionality of the 360° camera with a digital recorder - including the PTZ functions for the recorded pictures." Recording can be carried out controlled by events or time or also continuous; the 400 GB hard disk permits a recording time length of up to several weeks.  Furthermore, duplex operation allows simultaneous recording and replay.  In addition, it has extensive search functions, programmable pre- and post-alarm recording and sector naming for monitoring of obscured locations, such as the museum entrance area for example. Heer GmbH installed normal surveillance cameras in the outer area of the Rothschild Palace, which was built from 1812 to 1824.  A total of eleven eneo CCTV cameras monitor the exterior facades, barriers and the different entrances.  In addition to the 42" plasma monitor, their pictures are also switched to a further seven eneo control monitors at the cash desk and personnel entrance, and they are recorded by an eneo 16-channel DLR1 Digital Recorder in the control centre. Designed for discrete video surveillance Sittig is fully satisfied with the innovative camera system.  "The 360° camera with matching recorder is the optimum solution for us - the system fulfills all the criteria we require: it is easy to install, its virtual cameras have everything in view throughout the whole area and they, just like the Almira Recorder, deliver clear and sharp pictures.″In this project, the preventative use of the camera system that is seen immediately upon entering the building is rather unusual: the camera and recorder were designed for discrete video surveillance and can be housed nearly invisibly in the ceiling when required.  Such as the tiny cylinder camera that is installed barely noticeably above the entrance steps and which delivers first-class pictures. 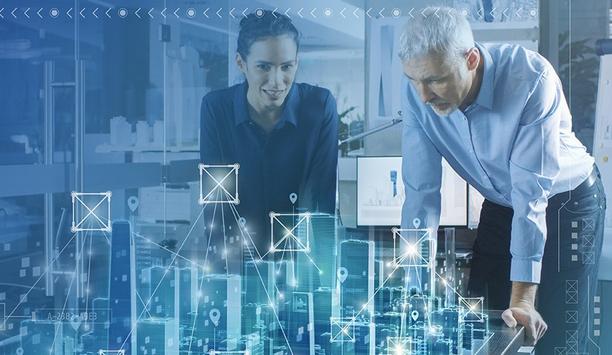