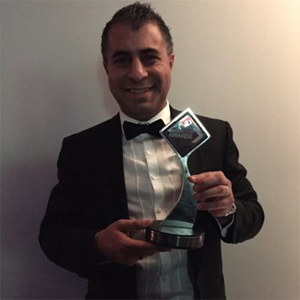 Sukhi Ghuman is the CEO and founder at Octavian Security.

The move sees two more companies move towards the integrated facilities management model CE Facilities Services has announced further expansion with the purchase of the UK division of Octavian Security. The move sees two more companies move towards the integrated Facilities Management model, which is becoming ever more popular with UK businesses. The deal sees CE Facilities Services purchase Octavian Security UK only, with the next phase seeing Octavian Security UK absorbed into the CE Facilities Services brand. Octavian’s other divisions in the USA, Middle East, Africa and Asia will remain under the Octavian brand name and continue under the guidance of CEO and entrepreneur, Sukhi Ghuman. Promote “Bundled Service” Offerings Octavian Security UK has seen a trend towards the integration of services and has been actively seeking to find the correct Facilities Management partner for a number of years to promote a move towards more “bundled service” offerings. Octavian Security UK will continue to operate from their offices at Octavian House, Riverside Business Park, Nottingham NG2 1RX with all day to day management remaining in place. Mr Ghuman launched Octavian 13 years ago, with recent successes including significant expansion in the Middle East – as well as a new training academy which currently operates from its head office in Nottingham. The decision to sell the UK division comes as commitments overseas mean that the UK portion of the business needs more attention than he can currently provide. Welcome Of A Specialist Security Team CE Facilities Services has always had a quality security division, however the acquisition of Octavian Security UK gives the company a huge advantage, allowing it to welcome an experienced and specialist security team to the company. It also places CE Facilities Services firmly in the top thirty UK security providers. Tomas Gronager, Group CEO of CE Facilities Services commented: “This exciting development will make CE Facilities Services unique in that we will be able to offer our clients, both new and existing, an exclusive service offering that brings together two of the very best service delivery organizations in their respective fields, and to provide the services that demonstrate innovation, passion and energy. CE Facilities Services is an exceptional company, and shares the same drive and ambition as Octavian, to achieve 100% customer satisfaction through service delivery.” Sukhi Ghuman, CEO of Octavian, added: “The Octavian brand will still be present in overseas markets, but I will no longer be CEO of Octavian UK. Octavian UK is a very successful business – but recent successes overseas mean that the UK division needs more attention than I can provide. “CE Facilities Services is a fantastic company with an excellent reputation. Job security will be maintained and I’m confident that this move will take the business to the next level and continue its legacy. I wish CE Facilities Services the very best with this arrangement and expect to be working closely with them over the coming weeks to make the transition as smooth as possible. I would like to take this opportunity to thank everyone who played a role in making Octavian UK a success.” Both parties will collectively maintain the highest level of service that its customers have grown accustomed to, whilst also continuing to build on both companies success. Both companies are excited about this new opportunity and are committed to ensuring a seamless transition with minimal disruption to the level of service and management clients receive. The main focus continues to be on providing exceptional client service and a quality product, delivered by a familiar and experienced team. CE Security supports the Security Industry Authorities objective of protecting the public by raising standards.

The expansion is expected to create wider global opportunities for Octavian and build relations with Africa’s most prominent businesses Octavian Security, the leading UK security provider, has kicked off its ambitious 2015 growth plans by launching a new South African office. The move now sees Octavian hold a presence in three continents across the globe. As a growing economy with unique security requirements, South Africa is a key market for Octavian, with the expansion expected to create wider global opportunities and build relations with Africa’s most prominent businesses – both locally and worldwide. Officially opening on February 5th with an exclusive launch event at the Trade Commissioner’s Official Residence, the new division will create 15 head office jobs, with the addition of a further 500 jobs for security personnel. Cornelius Muyunda, Octavian’s new Director of Africa, will be heading up the new office. He said: “South Africa is a very exciting new market for Octavian and is a country which faces a number of security challenges in terms of crime and terrorist threats. South Africa is one of the most at risk countries across Africa, so we have worked hard to develop specific offerings and skill sets to meet these needs. “By creating hundreds of jobs, diversifying the market and providing exceptional services for some of the country’s biggest names – the opening of this new office is not only a positive move for Octavian, but for the South African security market as a whole.” The launch event will be attended by some of South Africa’s most influential businesses, including senior directors and executives from a number of global corporate companies. It will also include a speech from Octavian CEO Sukhi Ghuman and South Africa’s Trade Commissioner Andy Henderson. Sukhi Ghuman, CEO and founder of Octavian Security, added: “Octavian’s expansion into South Africa is a real indication of our global reputation and the high regard with which the company and its services are held. The South African market has its own unique challenges, but our vast amount of expertise and experience is sure to make this latest expansion a great success for all involved.” Octavian’s full suite of security services will be made available throughout South Africa, with the most popular services expected to be manned security, consultancy and training services for corporate businesses and specific offerings for the mining industry. Octavian will also offer a free risk assessment for all attendees to the launch event on February 5th, as well as a cocktail reception and networking evening.

Octavian works alongside blue chip and public sector organizations to help protect their operations Octavian Security, the leading UK security provider, has been named "Outstanding Business of the Year" at the Institute of Asian Businesses (IAB) Annual Dinner and Awards ceremony 2014. The IAB, a part of the Birmingham Chamber of Commerce Group, recognizes the needs of Asian businesses in the West Midlands and celebrates their achievements with this year’s prestigious event held at the ICC Birmingham on Saturday 29th November 2014. Speaking of the award win, CEO and founder of Octavian Security, Sukhi Ghuman said: “Outstanding Business of the Year is a truly great accolade to hold and is a real sentiment to the work that everyone at Octavian carries out on a daily basis. Whilst we have clients and branches based all over the world, it’s important to us that our global growth doesn’t impact our home grown services and awards like this only solidify this ethos. “Security is one of the primary concerns of businesses at every level and much of our success is down to ensuring that first-and-foremost, our clients know that their business is in safe hands. It’s a real honor to be recognized by the West Midlands Asian business community and an achievement that will be greatly received from everyone involved with the business.” The award is the tenth industry-lead award Octavian Security has been involved with this 2014, most notably winning the IBBF International Business of the Year Award and Business of the Year at the British Indian Awards.

Octavian Turkey will offer all services available to its existing divisions including manned and event security Octavian Security, the leading UK security provider, has announced a joint venture to expand the business into new territories by founding a new Turkish division. Connecting with Turkish company EKOL, the development of Octavian Turkey sees both parties take significant strides into the Turkish security market. Dr Mehmet Naci Efe will be at the helm of Octavian Turkey, with CEO and founder of Octavian Sukhi Ghuman continuing to head up the global business. A global strategy team will also be put in place to maximize the worldwide reach of the Octavian brand. The two companies were introduced by Turkey’s Deputy Director for the Ministry of Culture and Tourism Askin Evyapan, with it soon becoming apparent that both businesses shared a common interest in expansion, security and core values. Octavian Turkey will offer all of the services available to Octavian’s existing divisions, including manned security, event security, remote monitoring, training and development and facilities management. The joint venture is expected to be fully operational by January 2015. Sukhi Ghuman, CEO and Founder of Octavian, said: “Octavian is pleased to join with EKOL in what will be a long term strategic relationship in the security industry. This joint venture is consistent with our global development strategy to enhance our global footprint. EKOL’s experience at a local level combined with Octavian’s international experience and core values places us at the forefront of propositions in this rapidly expanding market.” Dr Mehmet Naci Efe, Head of Octavian Turkey, added: “For some time we have been looking to partner with an organization to create this joint venture, but it was very important that we found the right company to do business with. Octavian Security share our ambitious business objectives, so we are very excited about what the future holds for Octavian Turkey.” Octavian’s move into the Turkish market will also act as a stepping stone as it continues towards strategic entry in to the Iraqi security industry, as well as interest in other surrounding countries.