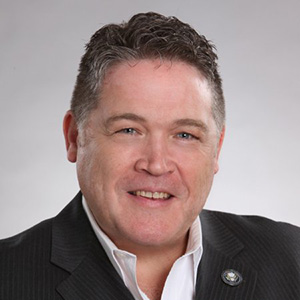 Stephen Sheppard is the Key Accounts Sales Manager for Farpointe Data. His primary responsibilities will include working with all Farpointe's Partners and managing both domestic as well as international sales to support new and existing partners. He was previously working with Hartmann Controls Corporation as Vice President of Business Development.

Farpointe Data’s Stephen sheppard is a 30-year veteran of the security industry Farpointe Data, a DORMA Group Company, the access control industry's trusted global partner for RFID solutions, recently announced that, after approximately a six month absence, Stephen "Shep" Sheppard is back at the company to persuade worldwide integrators and access control manufacturers to partner with Farpointe Data and bring safe, secure access control to their own customers. Sheppard is a 30-year veteran of the security industry starting with being an HMX-1 Presidential Security Guard while in the U.S. Marine Corps to seven years with Farpointe. Exploring Long Range Reading Market  "In the time I was away from Farpointe, I gained a much better understanding of the relationships between a systems manufacturer and third-party product suppliers, specifically when it comes to reader and card technology," emphasises Sheppard. "It is truly a symbiotic relationship. Efficient, competent and timely supply are equally important. I have felt the sting of an end-user call, threatening to cancel an order because of delays. At Farpointe, delivery is typically between one to three days.    "I also didn't appreciate how much it meant to Farpointe partners not to have Farpointe itself competing with them," Sheppard adds. "Farpointe doesn't sell direct to dealers or to national distributors. Plus, the RFID product line of proximity, smart card, long range and specialty readers and cards is spectacular and extremely competitive. It's especially interesting to see how the market for long range reading in particular has blown open in the past 12 months. Recent Acquisitions And Mergers "I'm also very excited about the acquisition by DORMA and their merger with Kaba," Sheppard says. "This not only means Farpointe is backed by one of the premier security brands in the world but that there are many new technologies and products that will soon be available to Farpointe partners and their customers." "We are delighted to have Shep back with us," says Scott Lindley, Farpointe Data president. "We know that those that are either on the edge of joining with us or are not aware of us will appreciate how hard Shep will work for them to make them more successful with their own customers." Potential partners attending ISC East and interested in working with Farpointe should go to Farpointe Data Booth #533 to meet Sheppard and the rest of the sales and marketing team.