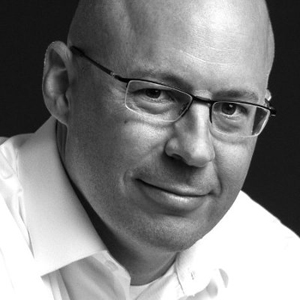 Stacy Stephens is Vice President of Marketing & Sales at Knightscope, a developer of autonomous data machines aiming to predict and prevent crime through deployment of autonomous technology, sensors, robotics and predictive analytics.

Part 6 of our Robots in Security series Later this year Universal Protection Service will begin offering a new autonomous robot to customers in California The next security guard you see may look more like R2D2 than Paul Blart, Mall Cop. Robots are starting to make their way into the offerings of security companies, and they may give guards a whole new image. Later this year Universal Protection Service — a division of Universal Services of America — will begin offering a new autonomous robot to customers in California. This Machine as a Service will feature robots manufactured by Knightscope, a security technology company based in Mountain View, California. The bots won’t replace human security guards, but they will free them from some of the boring and low level work — such as staring at monitors — that has long been the bane of the profession. That will allow people do higher-level jobs require decision making and judgment. “It goes to the broader growth of security as a profession and the broader growth of using technology for gathering information,” explains Mark McCourt, Vice President, Enterprise Security Services at Universal Protection Service. “It’s about being more predictive vs. reactive in security.” Providing Actionable Intelligence One of the great challenges of security at every level has been access to the right information at the right time.    “The autonomous data machine is a very unique and powerful way to have a set of eyes, ears and even noses,” says McCourt. “It can do a number of things that are really a force multiplier to collect data in its surroundings and send that data into that central location or operations center where analysts can review it.” Knightscope was founded by Stacey Dean Stephens, a former law enforcement agent, and William Li after the Sandy Hook mass shooting. A report had found that if officers had been able to get into the building a minute sooner more than a dozen lives could have been saved. Robots equipped with cameras and sensors can provide actionable intelligence that can speed the deployment of law enforcement. These devices – which are essentially at eye level, also offered the prospect of better images than those provided by stationary mounted CCTV. These robots will be particularly useful in high-crime areas where constant monitoring is essential He came up with the idea to build a predictive network to prevent crime using robots. The units collect data using 360-degree high-definition and low-light infrared cameras and built-in microphones that can also be used two way communication. The system can identify suspicious sounds such as breaking glass and send an alert to the security network. Depending on your age and pop culture background, Knightscope’s K3 and K5 machines will remind you of the friendly Star War’s R2D2 or the not-so-friendly Daleks of Dr. Who fame. The design is more a case of form follows function than trying to emulate a pop culture icon, according to Stephens. Vertical Markets The company has been marketing the machines to office buildings where the larger outdoor-oriented K5 units function as security assistants. Customers include a number of Silicon Valley tech companies and yes, even a local mall. The deal with Universal marks a big step toward making the robots more widely available. “In Silicon Valley we have all these autonomous vehicles running around logging more than half a million miles,” notes Stephens. “Why not make an automatous robot using the same technology that they use to navigate busy streets?” The new K3 model now in development is designed for indoor use, while the larger K5 operates outdoors within fenced areas such as parking lots. Much like the systems used on self-driving cars, the robots are equipped with 19 lasers that can create a 3D image of their surroundings. They also have the ability to recognize anomalies such as an open door or gate and send an alarm to central dispatch. Companies Leading The Way At Universal company officials recognized it was good time to become the leader in offering a robot option to customers. "The autonomous data machine is a very unique and powerful way to have a set of eyes, ears and even noses"  “The technology has come a long way,” says McCourt. “Price points have come a long way and so economically it makes sense now to give it a try.” These robots will be particularly useful in high-crime areas where constant monitoring is essential. They also offer a deterrent that has previously only been provided by uniformed security. At more than five and a half feet tall and 300 lbs., the machines are easily seen. Gliding across a parking lot with lights flashing, they can be startling.    Just as Universal sees benefits in being first, Knightscope is also an early offering in the robot space. “Knightscope is the only company with a working security application-focused ADM,” says McCourt. “We’ve met with a lot of companies and seen a lot of prototypes, and there will be many more machines rolling off the assembly lines for demonstration and testing.” If robot security continues to grow as the experts are predicting, the company will be looking at other models to meet customer needs, he adds. “We’re talking to customers who demoed it and looked at it and who really kicked the tires and the acceptance and satisfaction rate was very high,” said McCourt. Catch up on our Robots in Security series here 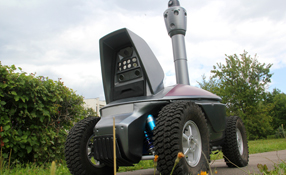