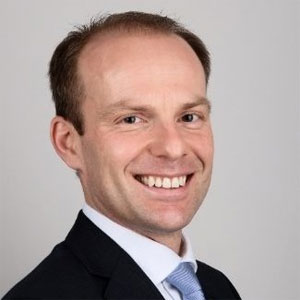 Sieger Volkers is the Managing Director at Nedap. 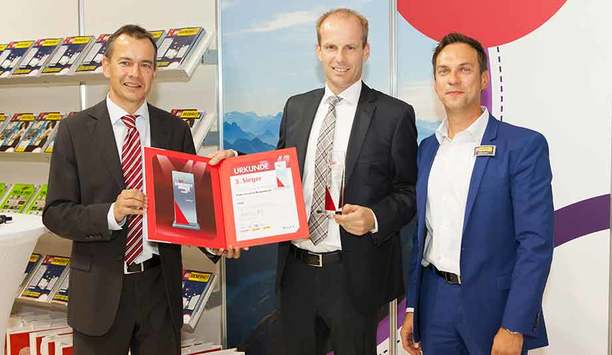 Dr. Heiko Baumgartner handing the GIT Award to Mr. Sieger Volkers Nedap Security Management has won a GIT Award in the D Access Control category for their high-end AEOS end-to-end security solution. This new end-to-end security solution is the first to offer digital protection for access control by unifying best practices from both IT and physical security.On the 27th of September, Dr. Heiko Baumgartner, Chief Editor of GIT Security, handed out the award to Mr. Sieger Volkers, Managing Director of Nedap Security Management.According to Sieger Volkers, this award proves that companies realize that they need to protect their access control system. Mr. Volkers said, “Nedap is the very first manufacturer to unify IT and physical security best practices into one end-to-end security solution. Thus far, IT principles of secure systems have not been applied to physical security systems. Consequently, physical access control systems are vulnerable to cyber-attacks.”Optimal Secure Communication From Card To ServerIn contrast to other manufacturers, Nedap offers a complete end-to-end security solution where both DESFire keys and digital certificates are stored in the Secure Access Module inside door controllers. This is unique in the market and ensures that all elements of the access control systems can be trusted and communication between all elements of the system is secured.Consequently, high levels of protection against both physical and digital threats is achieved. It requires much more efforts for hackers to obtain DESFire keys. Moreover, strong authentication ensures that door controllers cannot be replaced by manipulated ones and it is impossible to connect alien devices to the network and send commands to door controllers.Secure Key UpdatesOn top of that the combined storage of DESFire keys and digital certificates in the SAM enables instant recovery when keys have been compromised. Incidents will not go unnoticed and AEOS allows to securely update keys when they have been compromised without the need to physically attend each card reader. 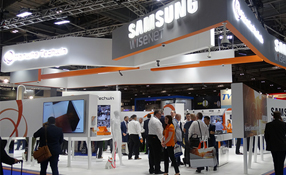 H.265 compression continued to be a popular topic from exhibitors on the second day of IFSEC Video beyond security, compression, HD over analog and integration were on the lips of several exhibitors at IFSEC International 2016. Strangely for a security exhibition, there were plenty of exhibitors talking about non-security applications on the second day of IFSEC International in London. For Axis Communications, Atul Rajput, Regional Director for Northern Europe, said the Internet of Things will have a big impact on security systems. Having been a leader in the IP video space, Axis is now involved in applications such as audio, intercoms and HVAC (heating ventilation and air conditioning) -- all over IP. Looking ahead, in five to 10 years, the Internet of Things will include sensors that can report back information such as environmental data and the interconnectivity in smart homes. “Now we’re involved in access control, horn speakers and retail analytics such as people-counting,” said Rajput. Over at Hanwha Techwin, a press conference highlighted one pioneering application -- using video to monitor a person’s vital signs such as breathing and heart-rate. Such a set-up could, for example, be used to monitor the wellbeing of detainees in police custody. Again today, H.265 compression was mentioned as a popular feature among exhibitors. Hanwha Techwin uses its own Wisestream compression technology in addition to H.265. The company says Wisestream can deliver up to a 50 percent reduction in bandwidth, with this rising to 75 percent if used with H.265. To put it another way, when you combine both with 4K images, the bandwidth required is the same as that for HD video. H.265 Not The Only Compression Standard In Town But not everyone has been carried away by H.265. The folks at Axis use something called Zipstream compression and H.264; the thinking is that most video management systems don’t yet support H.265. Zipstream uses a dynamic frame rate that reduces the rate to its lowest when a scene is static, then increases it when there is movement or activity. Say you reduce your video storage by half, it translates into needing less hardware and less cooling, thereby reducing the carbon footprint of the end-user. Another big talking point was HD over analog, or AHD. At Hanwha Techwin, for example, where they have a full range of AHD cameras and NVRs, they say the technology has “taken the market by storm” – especially in the UK, southern Europe and even Nordic countries. It seems existing analog infrastructures, their ease of installation and low cost of implementation account for the high demand for this video technology. Partnerships and integration were also big themes at this year’s show, as Milestone promoted their Open Platform Community Partnerships Lead To Better Security Solutions Partnerships and integration were also big themes at this year’s show. VMS (video management system) supplier Milestone Systems announced what it describes as a “deep level partnership” with access control specialists Nedap. “Milestone always [was] an open platform company because we couldn’t do everything ourselves,” said Kenneth Petersen, Chief Sales and Marketing Officer. “We now want to take this to the next level to be an open platform community. Together with our partners, we can offer the best solutions.” Sieger Volkers, Managing Director of Security Management at Nedap, said: “The best of video management and access control will be combined into a solid, seamlessly integrated security solution. We’re committed to developing a deep integration between our access control platform AEOS and [Milestone’s] XProtect, reducing delivery risks and complexity for our mutual partners.” Hardware And Software In Harmony With this approach, Milestone hopes to provide more certainty about different software and hardware working well together, which should make life easier for integrators too, who are just beginning to integrate IP access control and video. A deep partnership, however, does not merely involve working together from a technical perspective but also with commercial operations such as sales and marketing. Milestone also announced a new global partnership with one of its existing partners, Dell OEM Solutions, which helps customers who have their own intellectual property to bring their technology to market. Dell will be able to fully test Milestone’s VMS and can simulate large camera systems, showing customers how their systems will perform before committing to them. Finally, speaking of VMS, AxxonSoft has brought these systems to a whole new level. The company was demonstrating what is said to be the first video transmission to a VMS from an HD-equipped drone. It incorporates a 14MP fisheye lens camera, flies at a height of up to 150 meters and can deliver images wirelessly within a 2km range. It is capable of providing video analytics and face recognition and should be available later this year.

Open platform technology enabled the integration of Nedap access control with the Milestone XProtect VMS Driven by the market’s requirement for a seamless integration between security systems, Milestone Systems and Nedap are entering a strategic partnership. By means of this partnership, they commit to a deep integration between the Milestone XProtect VMS and AEOS Access Control from Nedap, as well as a close cooperation in their mutual goal markets. As demand rises for smarter buildings, facilities and cities with integrated IT-systems for monitoring and controlling, the need for integrations between security systems is also growing. The use of open platform technology has been instrumental in integrating Nedap access control with the Milestone XProtect VMS. Developing Best Of Video And Access Control “This strategic partnership is important not only for us but also for our ever expanding partner community. To us access control integrations are a very important focus area, and we are thrilled to tighten the ties with such an important player in the market.” says Thomas Lausten, Vice President of EMEA at Milestone Systems. “We look forward to expanding the partnership and increasing the benefits for both Milestone and Nedap partners.” “The best of video management and access control will be combined into a solid, seamlessly integrated security solution,” says Sieger Volkers, Managing Director Security Management at Nedap. “We’re committed to developing a deep integration between our Access Control platform AEOS and XProtect, reducing delivery risks and complexity for our mutual partners.” The enabling factor behind the easy and flexible integration between AEOS Access Control and Milestone video management software is the extended integration capabilities of Nedap’s AEOS and Milestone Integration Platform Software Development Kit (MIP SDK) 2016. Both XProtect Smart Client and AEOS provide a consolidated interface with functions to effectively monitor access events, manually assist passages and conduct investigations of specific access points or cardholders. Milestone and Nedap are committed to providing the market with a seamless and deep integration that allows its users to quickly signalize, react and adapt to suspicious situations.

Nedap will present on the vulnerability of physical security systems to cyber attacks at the ASIS conference Nedap is diamond sponsor of the ASIS European Security Conference & Exhibition, just like the last 2 editions of the conference. Besides the sponsoring of the well-known Welcome Party, Nedap will also be actively present during the ASIS Conference & Exhibition the 7th and 8th of April in London. At this conference, Nedap will present on the fact that physical security systems today are vulnerable to cyber security attacks. This needs to be addressed – but by who? Physical Security Vulnerability Access control systems are often not perceived as being IT systems connected to the network. Due to this lack of awareness, the requirements to secure IT systems are not yet imposed to physical access control systems. “Consequently, access control systems are currently vulnerable to cyber-attacks which can have dramatic impact on the protected premises”, says Daryn Flynn, Business Development Manager at Nedap Security Management. “These risks can no longer be accepted by the security industry, so the question is raised: who should take responsibility?” Nedap's Role At ASIS European Conference & Exhibition 2016 As a thought-leader in the security industry, Nedap plays an important role at the ASIS European Conference & Exhibition. That is why, for the third time in row, Nedap is organizing the Welcome Party – the annual opening of the event that has proven to be very successful and well-perceived by its visitors. Moreover, Nedap participates in the panel discussion, presents at the Technology & Solutions Track and can be found in the exhibition area. Why? Sieger Volkers, Managing Director of Nedap Security Management explains: “Nedap always thrives at being in touch with users in the industry to learn about the challenges they’re facing so we can develop solutions that help them overcome these challenges. Also, as a manufacturer we see it as our responsibility to help customers by sharing knowledge. And not just our knowledge, but also the knowledge that sits with experts in the field. ASIS is a great opportunity to do exactly this.” Nedap will discuss the vulnerability of access control systems to cyber-attacks on Thursday 7th April at 14:50 GMT. You can meet the team and find more information on the topic at their stand C9. The ASIS Welcome Party, powered by Nedap will take place on 6th of April 2016 in the Leadenhall Building on the evening of the 15th ASIS European Security Conference & Exhibition in London.