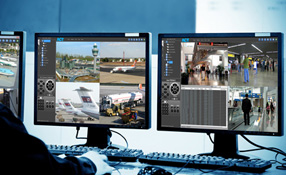 Vanderbilt recently hosted a webinar discussing the company’s ACTpro access control system, hosted by Michael Byrden, Strategic Partnership Manager. Such was the webinar’s popularity; it was ran on three separate occasions to meet demand. Much positive feedback was received from attendees, as well as some follow-up questions. Below are some of the most common follow-up questions attendees to the ACTpro webinar had. Does a single door mean two readers? Yes. All ACT Controllers support read in and read out readers. Are ACT Readers Wiegand? Yes. ACT Readers can be configured to be Wiegand. How many input and output points available in controllers? Each ACT Controller has two additional programable inputs and outputs. When an employee leaves the organization, can the cellphone credential be issued by other employees? No. The cellphone credential is associated with the user. If the user changes their phone, they can bring their credential with them. Does the Vanderbilt Bluetooth solution work when the phone does not have network connectivity? Yes. The Vanderbilt Mobile Credential App will function once Bluetooth is switched on. Can a user belong to several user groups? When changing a user from one user group to another, what happens if there are conflicts between old user rights and newly assign user rights? No. A user can only be in one user group. However, users can be given additional access rights using the Extra Rights function. How can a person join the Vanderbilt Aspire Partnership Program? By contacting their account manager to discuss membership options. How can a person integrate ACT software with CCTV cameras? ACTpro software integrates with several leading video vendors. This information is on the Vanderbilt website.

ACTviquest highlights intruder attempts to restricted door anywhere on site to operators and presents with camera feeds in relevant zone Dante Group has installed ACTviquest, an integrated access control and video management solution, at the £100m Manchester Arndale shopping mall. Unique in the security industry, ACTviquest from ACT enables users to operate cameras and access control from a single platform as part of a unified suite. The Arndale is the third largest city-center shopping venue in Europe. It has complex needs and required a scalable solution that would combine VMS with access control as a genuine integration rather than a ‘bolt-on’ compromise. ACTviquest offers flexible video recording, retrieval and archiving options with broad access control information such as break-glass, door forced or door ajar scenarios. Users at the Arndale are benefiting from a GUI that shows the site with a 3D feel which represents all devices and their current status as icons. Fire alarm systems and break-glass incidents are included in these views. If a member of the public or an intruder attempts to use a restricted door anywhere on the 140,000 square-meter Arndale site, ACTviquest highlights this to operators and presents them with camera feeds in the relevant zone. The Arndale has a nine-floor central tower with offices that are used by its own staff and third parties. Employees use MIFARE cards with access privileges appropriate to their job. They present their card to readers, and door control is then managed via ACTpro 4000 controllers. These units are designed for high-traffic volumes where changes to the cardholder database are a regular occurrence. They can manage up to 60,000 users. ACTviquest MobileApp For Remote Monitoring "ACTviquest is empowering management at Manchester Arndale to process an ever-increasing range of data types and combat broad security threats", says Michael Byrden, Sales Director, ACT ACTviquest has a mobile app that not only allows Arndale managers to view the site remotely but means they can leave the control room during an incident to gain information on the ground as a situation unfolds while still viewing camera streams and access control status from a smartphone or tablet. This level of information can contribute to optimum decision-making. The app, which is available for both iOS and Android, gives comprehensive PTZ control of cameras. As an alternative, users outside the operational hub can both view and control up to six cameras as well as monitoring access control events simply by logging in to any major web browser. Thousands of business visitors come to the site in Manchester’s city center for appointments every week. ACT worked with Dante Group and Thames Valley Controls (a high-technology lift control specialist) to ensure that ACTviquest is aware of which lifts and doors are appropriate for each visitor’s destination. If a visitor tries to enter areas that are not applicable to them they will be denied access. As the project develops, ACT will be integrating with over 150 cameras (both IP and encoded feeds from analog) at the Arndale. The software supports all major camera brands including Hikvision, Ganz, Vivotek, Bosch, Samsung and Sony. Combat Broad Security Threats Michael Byrden, Sales Director of ACT, said: “The installation shows ACT supplying unified access control and situational awareness to one of the most important shopping malls in the UK. Unlike most retail sites, the focus here is public safety and general logistics rather than shrinkage. ACTviquest is empowering management at Manchester Arndale to process an ever-increasing range of data types and combat broad security threats.” ACT solutions are being used extensively in the retail sector. Other major applications include the French chain Hyper U, Asda in the UK (a subsidiary of Walmart), Sainsbury’s, Aldi and Ocado (an online supermarket). Dante Group provides project management services as well as commercial fire and security systems throughout the UK. The company has mechanical and construction divisions. It has achieved the quality standard ISO9001 and environmental standard ISO 14001. Specialisms include CCTV, door entry, intruder alarms and PA/VA.