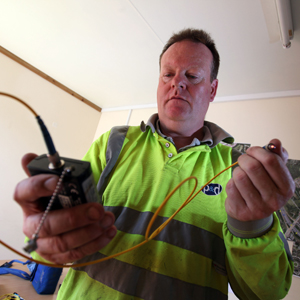 The AMG transmission installations cover a distance of 99 kilometers, including part of the Manchester Smart Motorways Scheme AMG, the British manufacturer of CCTV transmission solutions, announces that they have completed the supply of a range of hybrid transmission systems for P&D Specialist Services which covers the M1, M3, M60 and M62 motorways. In total, the new AMG transmission installations cover a distance of 99 kilometers across all four motorways. The M1 implementation consists of 78 cameras deployed between junctions 15-19 (33 kilometers) and the M3 implementation consists of 109 cameras deployed between junctions 2 and 4a (31 kilometers). Finally, the M60/M62 installation consists of 142 cameras deployed over a 35 kilometer stretch of road, as part of the Manchester “Smart Motorways Scheme”. A new project on the M1 - Junctions 32-35a, a stretch of 23km, commenced April 2015. The M1 project will introduce a stretch of ‘managed motorway’ between Junction 32 and Junction 35a. This will help relieve congestion by using the hard shoulder as a running lane and using technology to vary the mandatory speed limits. Starting with 30 cameras, the M1 CCTV roadworks solution will grow to 60 cameras, over the project period. Quicker Fiber Splicing During Installation According to P&DSS Project Manager, Frank Gearon, “One of the key advantages of using AMG’s transmission equipment is that they require a smaller number of fibers, which again means quicker fiber splicing during installation and that saves time. We have huge experience of doing these projects, and they all run with strict project deadlines. The M1 project took 8 weeks, M3 took 10 weeks and M60/M62 took 12 weeks. So saving time during installation is really important to us and I am happy to report that all projects were completed on time. When a stretch of motorway undergoes roadworks, it often means that there are no emergency telephones as the hard shoulder is being used as a ’running lane’. The result is that motorists have nowhere to stop safely and summon assistance in event of a breakdown or accident. That’s where the CCTV solutions we deliver come in. The aim is to deliver a real-time overview of the entire stretch of works and link all the images from the cameras back to the 24/7 manned control room. We use fiber optic cables to cope with the long distances involved and this is where AMG’s transmission technology plays a vital part. We have been working with AMG since 2009 so they’re a proven supply chain partner when it comes to fiber optic transmission equipment.” Delivers Redundancy Protection Group Managing Director, Pat Musgrave adds, “On some of the earlier projects, we used the acclaimed AMG 3700 series. One of these was a Managed Motorway project on the M4/M5 Almondsbury Interchange at Bristol. But since 2013, we've decided to implement the AMG 9024– Multi-Service Ethernet Switch series (M-SES) affectionately known as the ‘Wonderbox’. On all the projects we have worked closely with the AMG technology team. We had specific requirements for the M60/M62 project and requested a proprietary redundancy feature which AMG implemented – known as the ‘X-ring’. The X-ring protocol allows an unlimited number M-SES units on each fiber loop, and sub-loops can be added seamlessly, while delivering redundancy protection in the case of switch or fiber failure. Failure is a real risk in a construction environment, where major engineering work frequently damages cables and roadside equipment. By integrating the dedicated video codec and RS232/RS485 into the MSES switch, video lag and control data is minimal.”