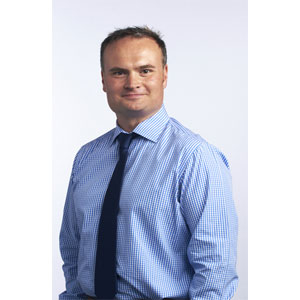 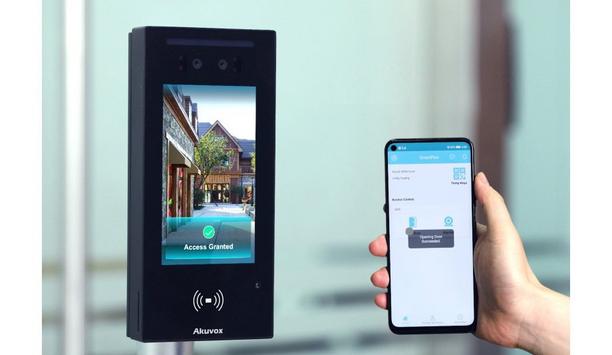 CIE (CIE Security), a global distributor of audio-visual and security brands, is pleased to announce the UK launch of the A05C Access Control Unit from Akuvox (Akuvox Networks). The A05C is the first of Akuvox’s brand new series of smart IP access control readers and features a distinct 5-inch HD color screen that is attractive in design and easy to use. AI and dual-camera Technology The A05C is one of the most advanced IP access control readers available on the market The unit also incorporates the latest deep-learning AI and dual-camera technology, which allows for secure, touch-free verification via face recognition, Bluetooth, RFID or QR Code scanning, all of which are supported by the Akuvox SmartPlus smartphone app. With these features available as standard, the A05C is one of the most advanced IP access control readers available on the market. Furthermore, the A05C access reader is also available with optional thermal detection modules to check anyone entering the building for fever-like body temperatures. Deploying contactless technologies “The COVID-19 (coronavirus) pandemic has changed the world - as we return to work, school, university and other public access environments, there is a large number of high frequency 'touch points' involved in our daily lives that are likely to spread germs and viruses,” commented Chris Edwards, Marketing Director of CIE. Chris adds, “With this in mind, Akuvox have been focusing on adding more products to the range that reduce these touch points during day-to-day activities by using a wide range of contactless technologies and features. The A05C is a prime example of product that Akuvox has produced to meet the demands for the growing architectural trend for COVID-19 secure ‘contactless pathways’ in the workplace.” A05C smart IP access control reader Akuvox is one of the renowned worldwide brands for IP intercoms, access control, and telephony equipment. Established globally, as well as in Europe, its mission is to improve people's lives with better communication, greater security, and more convenience, all through its product offering. The A05C smart IP access control reader comprehensively delivers on this promise. The unit also embraces QR code-based access control for ‘one time’ access for external visitors Featuring face recognition technology integrated into an access control unit, the A05C will automatically compare the visitor’s face with a database of enrolled faces and perform automatic match notification to grant access. The unit also embraces QR code-based access control for ‘one time’ access for external visitors. Typically, residents/building managers can generate a QR code from the Akuvox SmartApp for a visitor to use on their mobile device, which will allow entry to the building (or specific area) on a limited use/fixed time basis. Wide range of authentication methods The A05C complete range of authentication methods for ultimate security and flexibility are: Secure infrared face recognition. QR Code (eg. for one-time access). NFC, RFID, and Bluetooth contactless via smartphone, ID card, or keyfob. Body temperature detection (if paired up with the Akuvox MD02 unit). The A05C Access Control Unit is IP65 rated so can be used for external gate systems and high-impact areas. This advanced access control device also supports ONVIF open standard for effective integration with other third-party IP systems and devices, such as IP CCTV cameras and Network Video Recorders (NVRs). 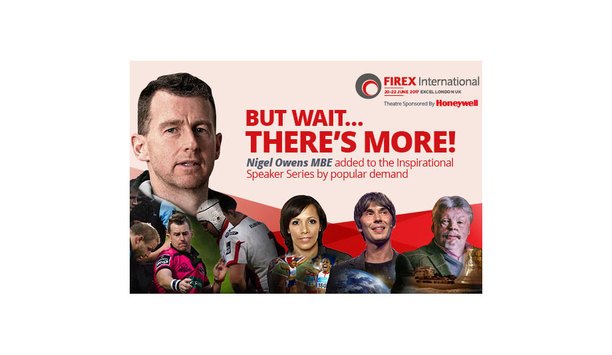 Following the announcement last month of FIREX International’s best ever keynotes; rock star physicist Professor Brian Cox OBE; double Olympic gold medallist, Dame Kelly Holmes; and Falklands War veteran, Simon Weston OBE, FIREX International and Autonomous FM are thrilled to reveal a fourth inspirational speaker for this year’s event. Nigel Owens MBE, acknowledged as the best referee in rugby union, will join these phenomenal speakers on stage to discuss operating at peak performance and making tough decisions. Taking place as part of the Protection and Management Series 2017, Europe’s leading events for security, fire, safety, workwear, facilities, and service management, at London’s ExCeL from 20-22 June 2017, these four keynotes will support over 25 hours of dedicated fire safety seminars. This Inspirational Speaker Series gives visitors the opportunity to hear from leaders outside of the fire safety profession, whose achievements are world-class and incredibly inspiring. Taking place in the Keynote Theater, sponsored by Honeywell, these four keynotes will captain the 2017 speaker program. Keynote Speakers Nigel Owens MBE, presenting 21 June, 13.30 – 14.00, on Peak performance and tough decisions: a personal story from ‘the best referee in rugby union’ will give an insight into remaining firm and impartial under huge pressure. The World Cup Final referee is widely considered to be the best official in rugby union. He implements rules fairly but allows the game to flow; he imposes his authority – but he isn’t afraid to show a sense of humor on the pitch. He’s also the only openly gay official in what’s seen as an especially macho sport. In speeches Nigel talks about the hurdles he had to overcome, and the skills you require to make tough decisions with tough characters. Following his keynote speech, Nigel will be around for questions, photos and autographs at the Autonomous FM Ltd.’s stand, T840, in the Facilities Show. Dame Kelly Holmes, presenting 20th June 11.30 – 12.30 and joining a panel debate 12.30 – 13.15 is best known for her success in the 2004 Olympics, where she won two golds and became only the second woman in history to claim the 800m and 1500m titles for British athletics. Prior to her success on the track she served almost 10 years in the military and was awarded an MBE for her services to the British Army. What many people may not know is that she has also battled with depression, and at Safety & Health Expo, following her keynote speech, Dame Kelly has agreed to share her struggles on the show’s mental health panel discussion. This will immediately follow her speech on ‘having the passion, compassion and courage to succeed’ on 20th June. "Since we launched the inspirational speaker program at Protection & Management in 2015 we’ve seen a phenomenal amount of interest from visitors" Professor Brian Cox OBE, presenting 21st June, 11.30 – 12.30 is one of UKs most famous (and dare say favorite) physicists, having made the world of science so engaging and accessible to the masses. He has played a key part in the ATLAS and CERN Large Hadron Collider projects, while still finding time to take part in TV programmes such as ‘Wonders of the Universe’ and ‘Wonders of the Solar System’, which have been viewed around the world by millions. Many will also know him from his keyboard-playing days in ‘D:Ream, the pop band behind the 90’s hit single, ‘Things Can Only Get Better’. Professor Cox will be ‘Exploring the Universe’ with us on 21st June. Simon Weston CBE, presenting 22nd June 11.30 – 12.30 was aboard HMS Sir Galahad with the Welsh guard regiment when it was bombed by Argentinean planes during the Falklands War. The horrific burns he suffered required a series of operations that continue to this day. Despite his injuries and the physical and mental suffering, Simon’s life is an example of great personal triumph and courage. He is a true role model for positive mental attitude and overcoming hardship. Simon will share his very personal story about ‘turning adversity into opportunity’ on 22nd June. Brand Director for the OSH portfolio Chris Edwards commented “Since we launched the inspirational speaker program at Protection & Management in 2015 we’ve seen a phenomenal amount of interest from visitors, so the keynote scheme is something that we continue to invest heavily in. I think it’s fair to say that for most events any one of this year’s speakers would be a marquee signing so to have all four appear is quite a coup. I look forward to seeing a packed auditorium at ExCeL in June.” FIREX International is part of UBM EMEA’s Protection & Management Series, the UK’s largest event dedicated to protecting and managing property, people, and information. The series incorporates major events Safety & Health Expo, Professional Clothing Show, IFSEC International, FIREX International, Facilities Show and Service Management Expo, which attract more than 45,000 attendees annually over three days to ExCeL London, with 1,600 suppliers showcasing their latest products, and 150 hours of seminars, workshops, and keynote speeches.

This will be the seventh year that CIE-Group staff has taken on a charity cycle challenge Celebrating its 50th Anniversary year in the professional AV industry, leading UK distributor, CIE-Group, will mark the occasion in September with its biggest charity challenge ever, as they enter three teams to take on a 550 mile cycle challenge across France: in just three days! The teams – made up of CIE-Group Directors and members of the AV sales and technical support staff – will cycle from St Malo in the North of France to Bordeaux in the South, covering more than 550 miles in the saddle. This will be the seventh year that CIE-Group staff has taken on a charity cycle challenge, having so far raised in excess of £13,000 for Cancer Research, The British Heart Foundation and local children’s charity Derby Kids’ Camp. All three teams – riding under the ‘HDBaseTeam’ banner – are sponsored by UK AV Signal Distribution brand CYP, with the team name giving a nod towards the vast range of HDBaseT products launched by CYP over the past two years. This will be the second year of sponsorship from CYP and CYP Sales Manager Gareth Rolls is a particularly enthusiastic supporter; “It gives us great pride at CYP to sponsor the CIE-Group team for their 50th Anniversary cycle challenge. The dedication and commitment to fundraising and the promotion of the charities of which they are passionate about, is truly awe-inspiring. Everyone here at CYP will be following the teams' progress and willing them on through the arduous three day ride. We encourage everyone in the AV industry and beyond to pledge their support by donating to this fantastic cause and help the team continue to change lives for the better.” The three HDBaseTeams will leave the UK on Wednesday 25th September, cycling from St Malo in the early hours of Thursday 26th with the aim of reaching Bordeaux in the rather later hours of Saturday 28th. Cycle Team Captain (and CIE’s Group Sales Director), Steve Collin explains: “Reaching our 50th Anniversary is a huge milestone for CIE-Group and it is important to the company and the staff to mark the occasion with an event that we can all be proud of, for many more years to come. “Our three chosen charities have been there for many staff members over the Company’s years and we want to make a huge effort to show our gratitude.” Cycle Team member and CIE-Group Marketing Director, Chris Edwards, has a very personal attachment to the Company’s adopted local charity Derby Kids’ Camp; “For the past 14 years I have been volunteering for the Charity which provides free holidays to many of the local area’s most disadvantaged young children. Over the years, I have had the pleasure to work with thousands of young children to provide them with what is most likely the first holiday they have ever experienced.” Also Chairman of the charity, Chris added: “The support of the CIE-Group cycle team over the past 7 years has been hugely important to our charity, with their fundraising efforts so far having fully funded more than seventy children’s holidays. With the efforts of the cycle team this year we look forward to that number being more than 100 children having the CIE cyclists to thank for an amazing experience and a happy memory they will never forget.”