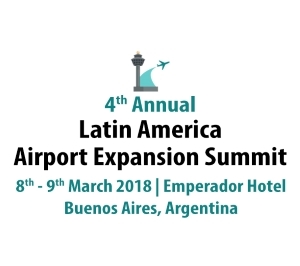 The 4th Annual Latin America Airport Expansion Summit is scheduled to be held at the Hotel Emperador in Buenos Aires, from March 8th to 9th 2018. The event will host government officials, investors, airport management groups and civil aviation authorities, who are slated to carry out discussions with consultants, architects, construction companies, equipment providers and service groups to better explore the market and support the airport project developments all over Latin America.

Argentina is investing over US$ 20 billion towards the redevelopment and upgradation of 19 airports, while Brazil raised US$ 1.2 billion in its auction of four airports and is planning to privatize all of its 54 domestic and international airports. At the same time, Mexico is constructing one of the biggest airports in the world, Panama is expanding heavily the international airport of Tocumen and Colombia is planning a new international airport in its capital, Bogota. Airport constructions and upgradation are going at a rapid pace in Latin America with lots of investments planned for the coming years.